During the year 1964, a group of believers consisting of approximately forty persons met each Sunday night in different homes for prayer, Bible study and worship. This small group felt called by God to establish a church founded upon a strict adherence to the Holy Scriptures as the infallible word of God.

On December 27, 1964, fourteen men met at the home of Lloyd Cozart and discussed the organization of a new church using the prayer group as its nucleus. The men heard a report from several persons who had visited the Associate Reformed Presbyterian Church in Statesville and had explored the prospects for seeking support from this denomination.

After further conference with officials of First Presbytery, the church was organized on January 1, 1965, in the home of Spencer Ennis with thirty-five persons signing membership cards. Through the generosity of Mr. Hugh Cummings, half-owner of the Cum-Park Plaza Shopping Center, church services were first held on the first Sunday in January 1965, in the store building with 137 in attendance. Various preachers from the Associate Reformed Presbyterian Church filled the pulpit. The congregation worshipped in this store building and at the Alamance County Agriculture Building pending the move to the present church building.

On February 21, 1965, Reverend Robert J. Marshburn, D.D., then Moderator of General Synod and representing First Presbytery, formally received the congregation into the fellowship of the Associate Reformed Presbyterian Church. There were approximately 185 charter members. In March 1965, a manse was purchased and a church building acquired from the First Church of the Nazarene. However, this church building was never occupied by the congregation and was sold in June of the same year.

Because of a generous gift of land by Mr. and Mrs. Duncan Bryan, the decision was made to build a new church building upon this land located on Saddle Club Road. The building was constructed and the first services were held here on October 2, 1966. 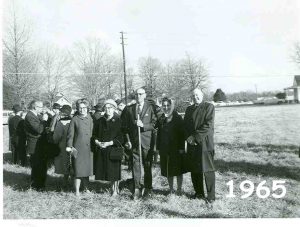 The first pastor called to the church was Reverend Grant F. Johnson who served the church from March 1965 to August 1970. Under his leadership, the church building was constructed, the manse remodeled and a full church program begun.

In January of 1971, Reverend Lauren Stanley Hartman became pastor and served until August 1974.

In August 1977, Reverend Clyde McCants was called as minister of our church. In August, 1978, Reverend McCants resigned to become a professor of Bible at Erskine Seminary.

Reverend Timothy Robinson was called in January 1979. Pastor Robinson is a native of Charlotte, NC, and graduated from UNC-C and Reformed Theological Seminary of Jackson, Mississippi. He served First ARP Church for 31 years until his retirement at the end of 2009.

In the spring of 1987, the congregation called Reverend Ken McMullen, graduate of Erskine Theological Seminary, as Associate Pastor. He served our church through December 1989.

On January 6 and 7, 1990, the church celebrated its twenty-fifth anniversary. Reverend Peter Kemeny was called as Associate Pastor in August 1990, and served until 2000.

In May 2003, Reverend Brian Walker was called as Associate Pastor, and he served until July 2006.

On April 25, 2004, the church was incorporated by the State of North Carolina. This act gave us a degree of legal protection that we would not have otherwise. The document was written so that none of the articles are in conflict with the Form of Government of the ARP Church. In 2004, in recognition of his 25 years of service to our church, Reverend Robinson was presented a love gift of a new car.

In January 2005, the church celebrated its 40th anniversary.

Reverend Bryan Gregory was called as pastor in November 2009, and he served until August 2014. In March 2012, during his tenure, the church entered into a season of facility renovations and an addition to the church. This was the first major renovation to the property in its forty-plus-year history. The work was completed in the fall of 2012.

In May 2015, Reverend Bryan P. Crotts accepted a call as our pastor. He is a native of Burlington, NC, and a graduate of King College in Bristol, TN, and the Reformed Theological Seminary in Charlotte, NC. He and his wife, Mandy, have three children. We trust that the Lord will allow Pastor Crotts to have a fruitful ministry here.

The year 2015 marks the golden anniversary of our church. We have been served by seven pastors and three associate pastors over these fifty years. Through peaks and valleys, we have always tried to be faithful to the Lord’s work.